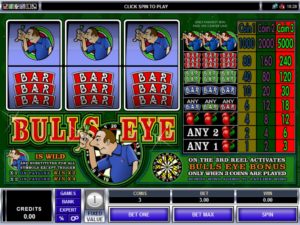 Until you actually play Darts you will not understand how just how hard a game to play it can be, and whilst the professional Darts players you will see playing on TV in any of the many tournaments held across the globe make it look easy, it is a game that not many people can truly master!

However, having said that, you are always going to find playing slots which some with a Darts theme are not going to require any specialist skills or abilities, but what you will find is that they can be quite high paying slots and slots you can have plenty of fun and enjoyment out of playing.

To give you plenty of ideas of just which Darts themed slot machines you can play in the online playing environment, I set about tracking down and playing as many of them as i could. Below you will find an overview of the slots boasting such a theme that ticked every single one of the right boxes on my checklist of wants and demands!

It was well over a decade ago that Microgaming launched their original Bulls Eye slot, that being a simple to play three reel slot on which players could play off each spin on its single pay line when staking one, two or three coins.

Those coin values however are fixed at 1.00, but by making the very wise decision of staking 3.00 per spin you are then able to spin in a bonus symbol on the end reel which will trigger a wheel spinning type of bonus game.

Another slot which has a Darts theme from Microgaming is their Bullseye slot, which is completely themed around the UK TV game show of the very same name. That slot has actually proven to be one of their most popular ones thanks to the way it has been designed.

You will have a whopping 243 ways of forming a winning combination on each spin you play off, and with a free spins bonus game and the Bully’s Prize Board bonus game too there are some huge winning payouts that can be achieved when playing it. In fact, the maximum payout possible from a single spin is a mind blowing 1,215,000 coins!

Any slot games that offers a fully enveloping playing structure are going to be sought after by players and another one worth playing if you are looking to play one of the best looking Darts themed slot made complete with some truly amazing graphics is the Darts Heroes slot.

That slot has only recently been designed and launched by a company called Stake Logic that is company owned by Novomatic. The thing that makes it a stunning slot to play is the 3D graphics and animations that will be in play as you spin its reels.

You will find plenty of very well known and much loved Darts players on the reels as reel symbols and it offers some high valued winning payouts not only via its base game but also via its bonus games and bonus features too.

One addition slot which could be of interest to you if you are seeking a Darts theme slot on which you are guaranteed to get to play off lots of bonus games and bonus features is the Let’s Play Darts slot from Blue Print Gaming.

That slot game is actually a Fruit Machine and as such when playing it you will only have to worry about activating one single pay line, but will be assured of having a highly entertaining slot playing session due to the frequency at which its bonus games and bonus features are trigged and awarded to you!